While chemerin shares no primary amino acid sequence homology with chemokines, it shares conserved positioning of cysteine residues with cystatin, a cysteine protease inhibitor abundant in chicken egg white. This conserved feature leads to a predicted 3D structure that displays similarities to the signature chemokine fold. We demonstrated that activation of chemerin involves proteolytic processing of the carboxyl-termini and removal of inhibitory amino acids. Various serine and cysteine proteases of the coagulation, fibrinolytic, and inflammatory cascades are able to activate chemerin. We also demonstrated that chemerin circulates at low nanomolar concentrations in plasma in an immature, inactive pro-form. The ubiquitous distribution of pro-chemerin is reminiscent of the prevalent expression of tissue factor (TF) in non-vascular sites. TF is the most potent activator of the clotting cascade, and provides a ‘hemostatic envelope’, allowing for the rapid detection and correction of breaches in vascular integrity. Similarly, chemerin may serve as a nearly ubiquitous ‘humor’ poised to translate tissue damage or bleeding into rapidly generated attractant fields for specialized CMKLR1+ cells. 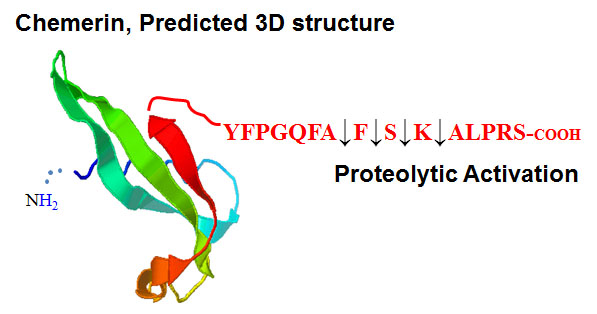